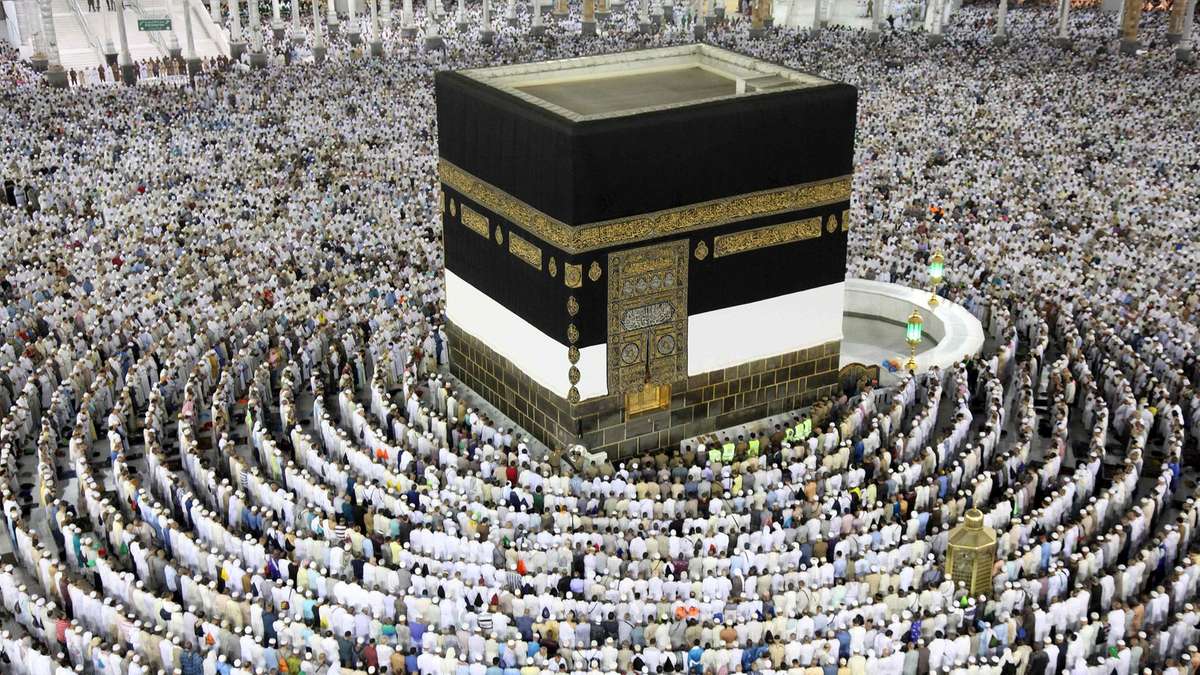 Why Do Muslims Perform Pilgrimage?

Performing pilgrimage (Hajj) is the fifth pillar of Islam and the most significant manifestation of Islamic faith and unity.
Allah (Subhanahu Wataala = means Glorified and most exalted) says:
(And proclaim to mankind the Hajj. They will come to you on foot and on every lean camel, they will come from every deep and distant mountain highway)[Qur’an 22:27]

Undertaking the Hajj at least once is a duty for all Muslims who are physically and financially able to make the journey to Makkah. The emphasis on financial ability is meant to ensure that a Muslim takes care of his family first. The requirement that a Muslim be healthy and physically capable of undertaking the pilgrimage is intended to exempt those who cannot endure the rigors of extended travel.

(Pilgrimage thereto is a duty men owe to Allah, those who can afford the journey; but if any deny faith, Allah stands not in need of any of his creatures.) [Qur’an 3: 97]

The pilgrimage is the religious high point of a Muslim’s life and an event that every Muslim dreams of undertaking. Umrah, the small pilgrimage, can be undertaken at any time of the year; Hajj, however, is performed during a five-day period from the ninth through the thirteenth of Dhu Al-Hijjah, the twelfth month of the Muslim Hijri calendar.

Performing the Hajj is the spiritual apex of a Muslim’s life, one that provides a clear understanding of his relationship with God and his place on Earth. It imparts in a Muslim not only the assurance that he has performed the fifth pillar of Islam by following in the footsteps of Prophet Muhammad (Peace Be Upon Him), but also the realization that he is part of an ummah (nation) that is more than one billion strong and spreads across the globe.

A Muslim does not earn “Hajj Mabroor” (acceptable pilgrimage) except by leaving all sins behind him/her. While falling into sin is prohibited at all times, Allah (Subhanahu Wataala) gives a specific order to the pilgrims to leave sins.

(Hajj is [during] well-known months, so whoever has made hajj obligatory upon himself therein [by entering the state of ihram], there is [to be for him] no sexual relations and no disobedience and no disputing during hajj.) [Qur’an2:197]

This verse emphasizes the nobility of the time and greatness of the place.

“Whoever intends [a deed] therein [i.e. in the Haram] of deviation [in religion] or wrongdoing – We will make him taste of a painful punishment.) [Qur’an 22:25]

Pilgrimage makes people realize their many evil deeds and mistakes, which are the results of weak fear of Allah and ignoring the Shari`ah (God’s commands) and Sunnah.

Wisdoms and Aims of Hajj

The goal of Hajj is realization of “taqwa” (piety, fearful awareness of Allah). This is why we find the link between Hajj and “Taqwa” in many verses.

Hajj is based on making one’s intention sincere for Allah (Subhanahu Wataala) and seeking the pleasure of Allah and none other.

In “Talbeya” which is the slogan of Hajj, singling Allah in one’s rituals is made clear:

From the most apparent goals and wisdoms of Hajj is the cultivation of Muslims’ appreciation, esteem and love of Allah’s symbols and sanctities.

(Hajj is [during] well-known months, so whoever has made hajj obligatory upon himself therein [by entering the state of ihram], there is [to be for him] no Rafath (obscenity) …) [Qur’an 2:197]

When Prophet Muhammad (Peace Be Upon Him) heard strong rebuking, hitting and shouts at a camel while moving from Muzdalifa, he said:

“O people, you must be calm, for rush and hurrying is not righteousness.” (Al Bukhari )

During Hajj, the servant is not only concerned about himself/herself; rather they shall mingle with other pilgrims, sharing with them recitation of “Talbeya”, and all Hajj rituals.

This becomes evident in the case of obligatory atonement for one who makes an intentional mistake that violates the state of “ihram”, or leaves for Muzdalifah before sunset, etc.

This becomes evident in the unity between all pilgrims in rituals and feelings, and the negation of traces of material differences between them, such as language, nationality, wealth, etc.

Prophet Muhammad (Peace Be Upon Him) said during his last farewell Hajj:

“O people! Verily, your Lord is one, and your father (Adam) is one, verily the Arab is not superior to the non-Arab, nor the non-Arab to the Arab, nor the white to the black, nor the black to the white, except by taqwaa (piety, fearful awareness of Allah).”

7) Cultivation upon different types of patience.

Pilgrims must restrain their selves from their desires by leaving acts that are prohibited while in the state of “ihram”. A pilgrim exposes oneself to hardship and fatigue in fulfilling the orders of Allah by performing the rituals, this becomes a motive for leaving sins and doing righteous acts.

This is clear in the servant’s bearing expenditures for Hajj.

Fifth: Realization of the Last Day

– Pilgrims’ departure from their country and separation from their family makes them realize death and the fact that they will leave their family one day for the Hereafter.

– Removal of stitched clothing and lack of adornment reminds them of the coffin and the resurrection of servants from their graves on the Day of Judgment barefoot and naked.

– Journey and fatigue make them realize their weakness and remind them of the hardship of the Day of Resurrection.

Sixth: Cultivation upon submission and surrender to Allah (Subhanahu Wataala)

Hajj makes Muslims get used to following a system and it trains them upon discipline. Pilgrims are trained upon submission, surrender and complete obedience to Allah (Subhanahu Wataala) as, for example, the actions of Hajj, such as abandonment of stitched clothing and adornment, “tawaf”, standing on `Arafat, stoning, lodging and shaving or cutting of one’s hair and other such matters that do not have an obvious meaning.

Seventh: Deepening of Brotherhood based on faith and Islamic unity

Pilgrims, with all their differences in languages, races and nationalities, gather in one same place at one same time, in one same appearance, pronouncing the same call of “Talbeya”, and for the same purpose: belief in Allah (Subhanahu Wataala), fulfillment of his order, all of which develops deep love among them, which, in turn, becomes a motive for them to know each other, to cooperate, exchange thoughts, advice, news and experiences, reinforcing in them uprightness upon this beautiful religion which joined them together.

Eighth: Strengthening the attachment of pilgrims to the predecessors

Actions of Hajj remind of the past, it reminds us of the migration of Ibrahim, with his wife, Hager, and his son to Hijaz, his story when he was ordered to sacrifice his son, his building of the Ka`bah and his call to people to make Hajj.

Also, Hajj is a reminder of the rising of our Prophet Muhammad (Peace Be Upon Him) and his farewell pilgrimage with more than one hundred thousand Companions; when he said to them,

Since then ages have passed, and at the present time the number of pilgrims is more than a million. This causes the pilgrim to remember the generations that have witnessed this land before him and to realize that the final destination is the same for all.

Ninth: Recitation of the Qur’an, remembrance of Allah and seeking forgiveness

The Pilgrim who contemplates during rituals of Hajj about Talbeyah, takbir: saying La Ellah Ela Allah, (No God But Allah), supplication, as well as the two revelations (Qur’an and Sunnah) which speak about them, will find that an increase in remembrance of Allah (Subhanahu Wataala) is from the greatest wisdoms and aims of Hajj.

Also Prophet Muhammad (Peace Be Upon Him) said:

“Circumambulating of the house, [going] between as-Safa and al-Marwa and stoning have only been legislated for establishment of remembrance of Allah on the Earth.” (Tirmidhi)

Hajj is one of the great occasions to ask Allah (Subhanahu Wataala) and to supplicate to him, it is an occasion that requires usage of the opportunity and submissiveness before Allah.

The Prophet, (Peace Be Upon Him) said:

At the end of the Hajj, the largest annual gathering of Muslims on Earth, pilgrims have a profound feeling of having gone through a life-transforming spiritual experience. They return with pride in having successfully performed a ritual dedicated to God and in belonging to a huge family of people that shares the same religious beliefs. And they acquire a sense of humility, inner calm, brotherhood and strength that lasts a lifetime.